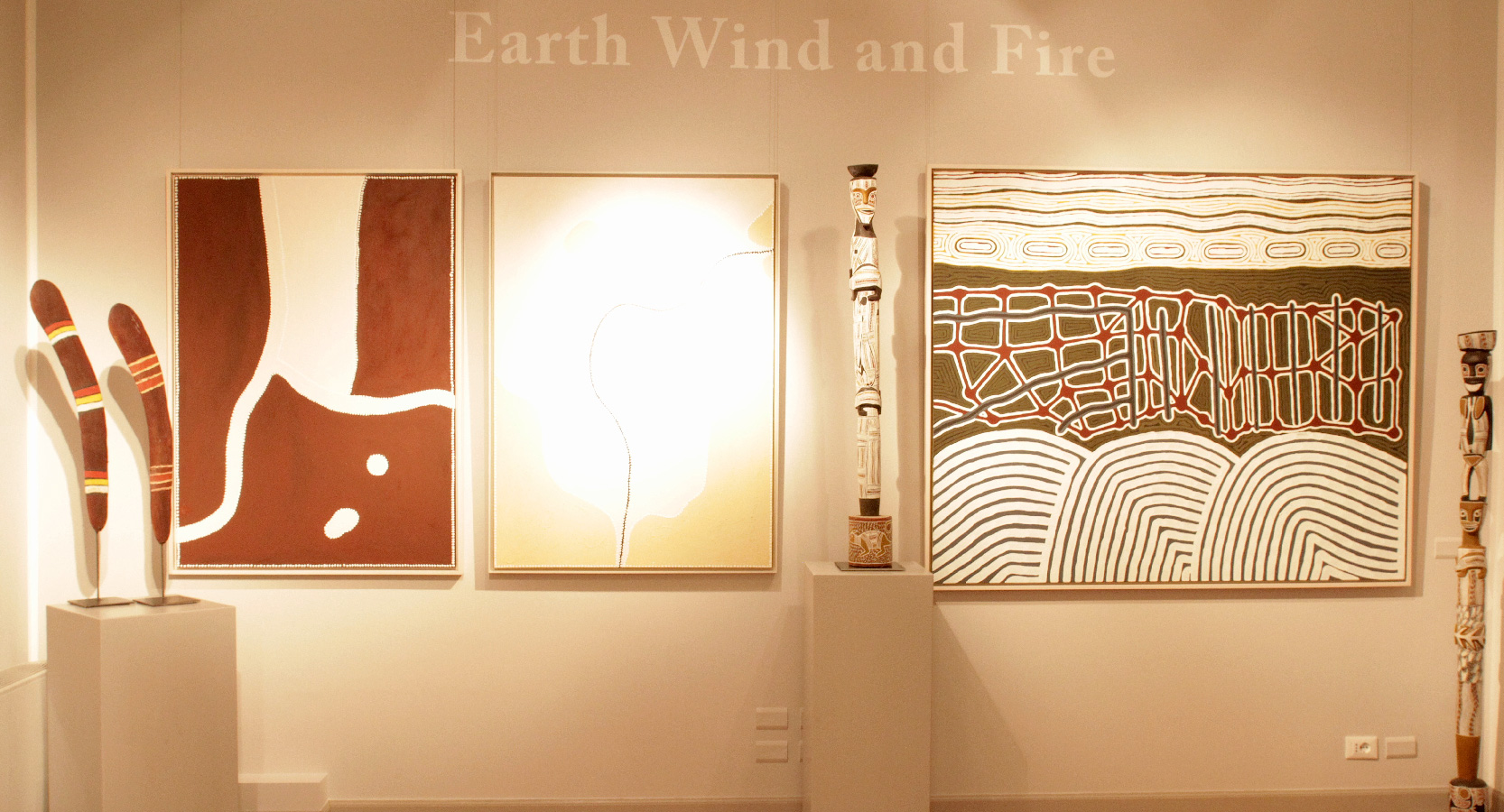 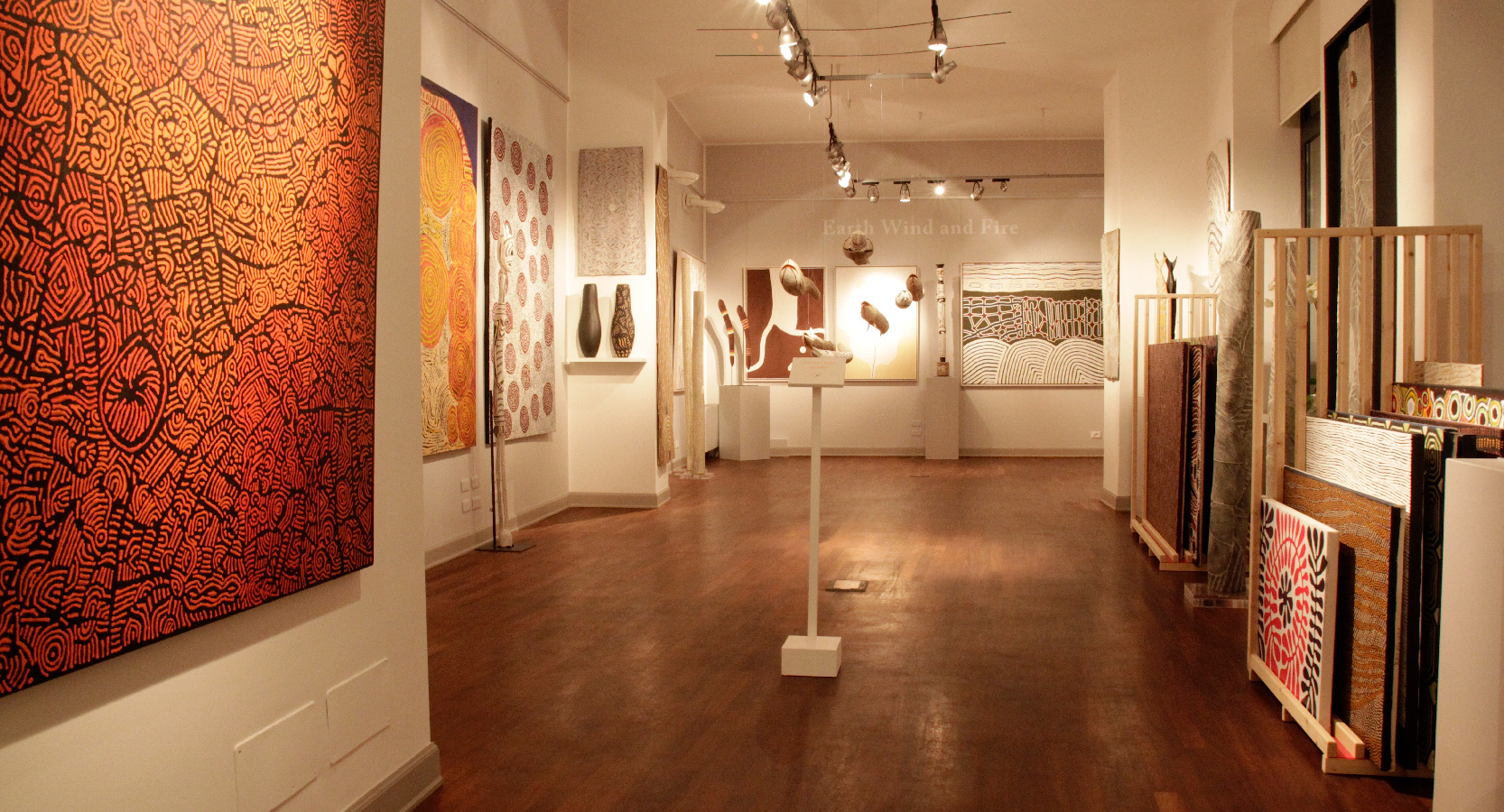 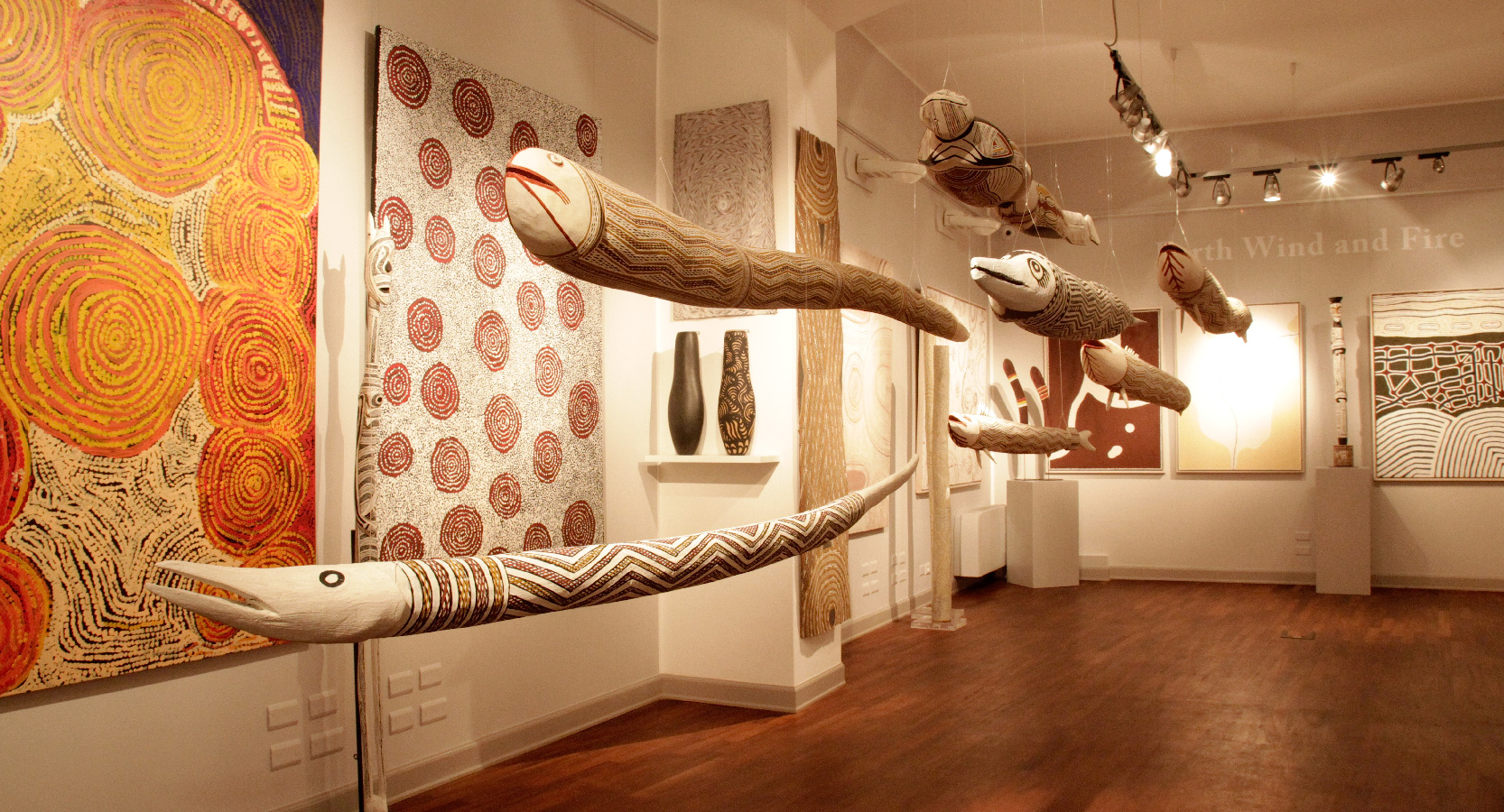 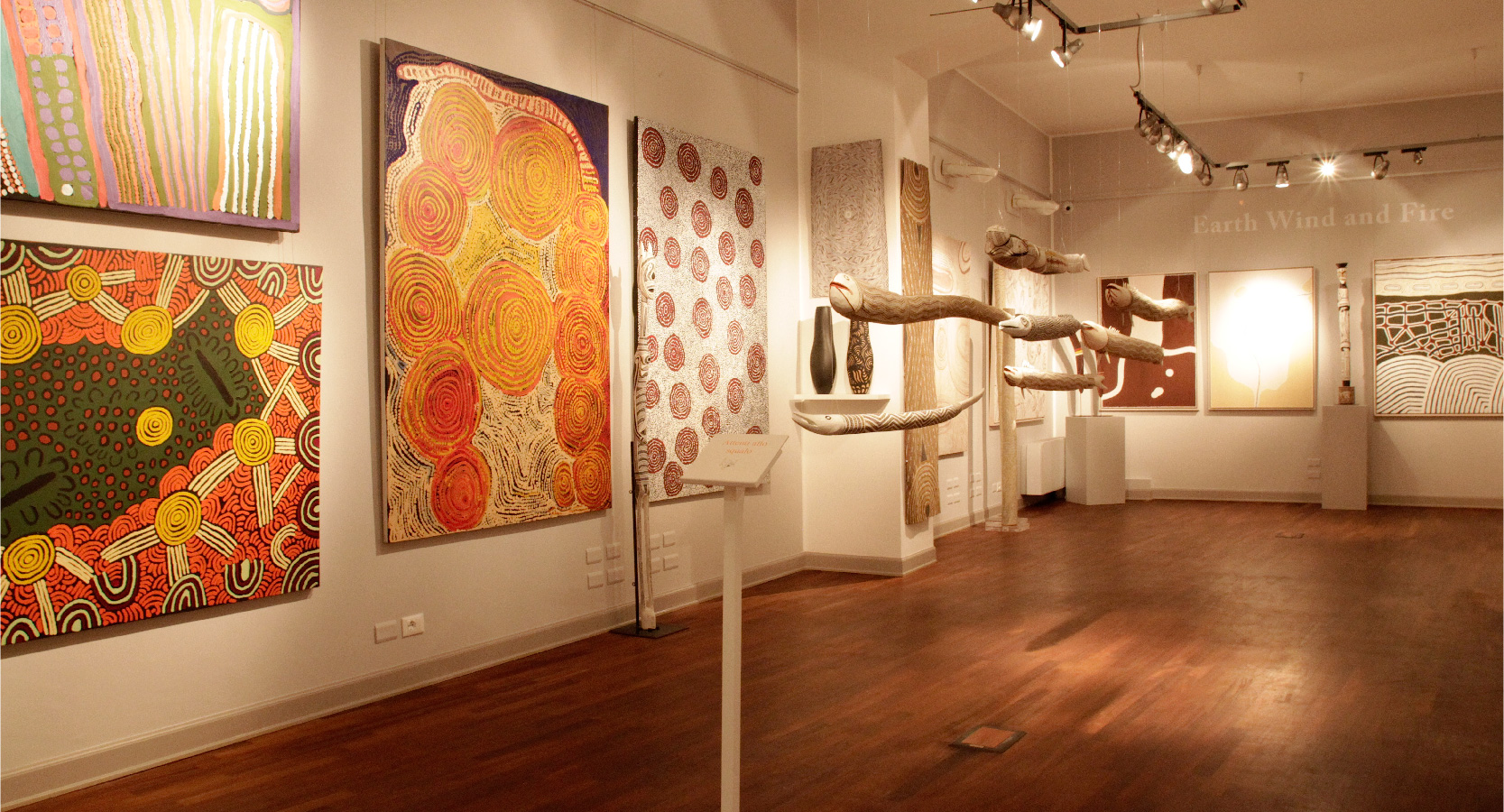 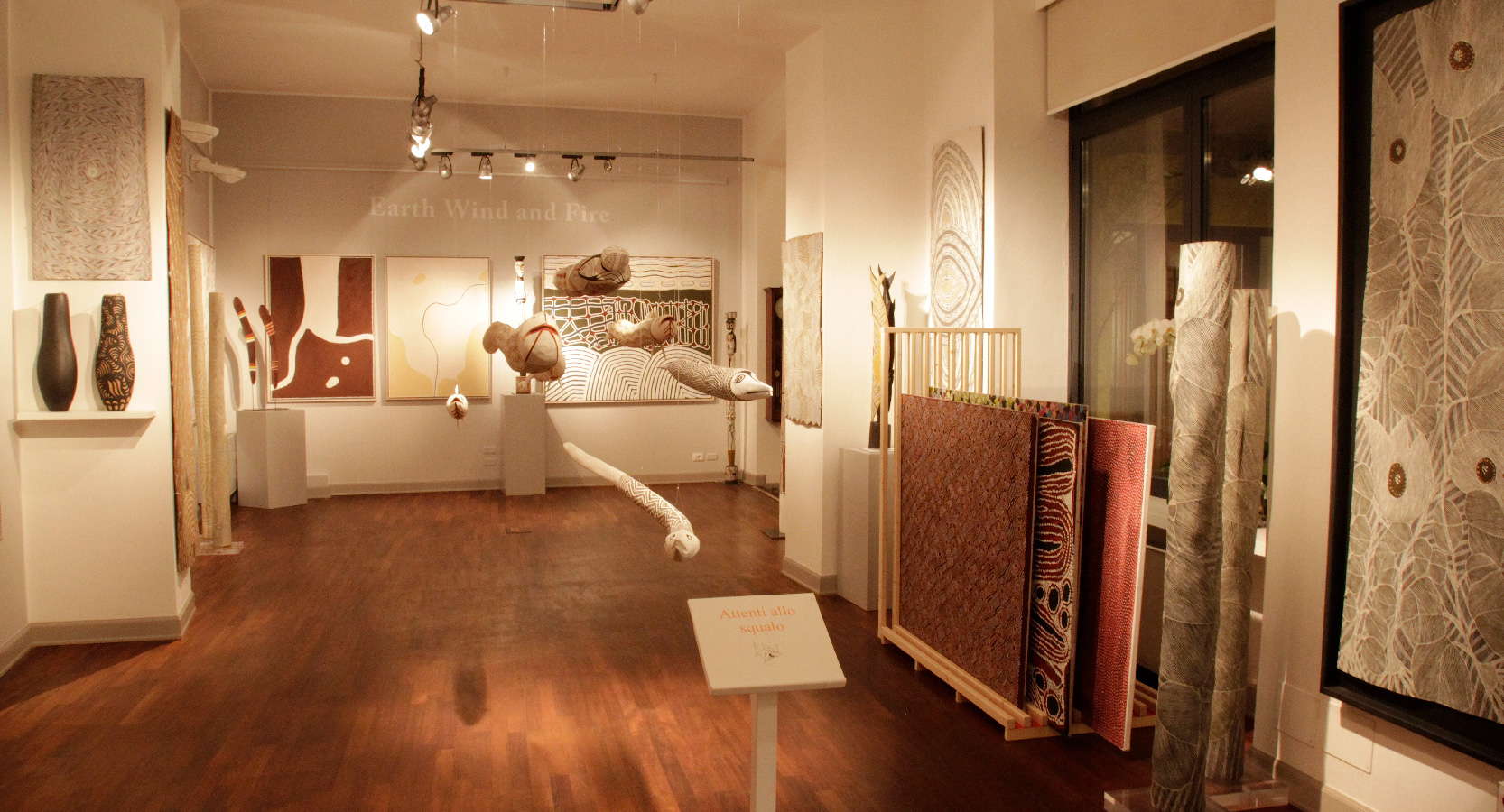 Our exhibition title, Earth Wind and Fire, refers to natural elements so common in the harsh Australian environment, and often included in the subject of Aboriginal Australian Art.

Art experts and private collectors across the world are becoming more and more excited by the unique cultural signi cance and contemporary appeal of Au- stralian Aboriginal Art that has been described by re- nowned art critic, the late Robert Hughes, as ‘the world’s last great art movement’.

Australian Aboriginal art may also lay claim to being the oldest living continuous culture, with paintings in rock shelters dating back 20,000 years. Much of this historic art relates to stories of the ‘Dreamtime’ – the Creation Period in Aboriginal belief, when important Ancestral Beings formed the land and created the people, plants and animals. ese Ancestral Bein- gs (often depicted in the art as human, animal, and plant) are said to have taught humans how to live.

A brief synopsis of Aboriginal art it is broadly based on the secrets of survival of a 50,000 year- old culture. e art reveals previously ‘taboo details’ of the beliefs of Indigenous Australians or “Dreamings” centred around natural ora and fauna, the land, sea, the co- smos and much else relating to the dramatic, harsh environment of remote, interior Australia. ese “secrets”, only understood by Aboriginal people and belong (almost like intellectual property) to special custodians, tribal elders and important lawmen and women throughout aboriginal communities across the continent.

Australian Aboriginals have no written language, and the nomadic lifestyle, historically one of survival, has produced a fascinating culture lled with closely guarded secrets, particularly the location of water! Historically, Aboriginal people painted their bodies for ceremony; painted maps in the sand; decorated ceremonial objects, and passed stories down through countless generations via their “Songlines”. is was their way of educating the young and keeping culture alive.

is very traditional artistic medium eventually took on a modern form, when, in 1971, a visiting art tea- cher, Geo rey Bardon, encouraged senior aboriginal elders to paint their ‘Dreamings’ on canvas, to pre- serve their traditional stories. ese stories had pre- viously been drawn on the desert sand, and were now given a more permanent form.

Australia’s Indigenous people are happy the wider world has become aware of their art and culture. With the inherent beauty and depth of this art, today, the movement has achieved world acclaim.

Currently the Museo delle Culture, Lugano is showing the important collection of 150 works of Contemporary Aboriginal Art collected by Beat and Andreas Knoblauch.